The Sultanate of Oman is famed all over the world for housing some of the world’s most historic battlements and crenellations in the form of awe-inspiring forts that are dotted everywhere along the country’s landscape: perched upon mountaintops, or nestled within deep ravines. Each fort has distinctive engineering and architectural features that showcase the intellect of the architects in designing elaborate fortifications to secure the land from foreign enemies. 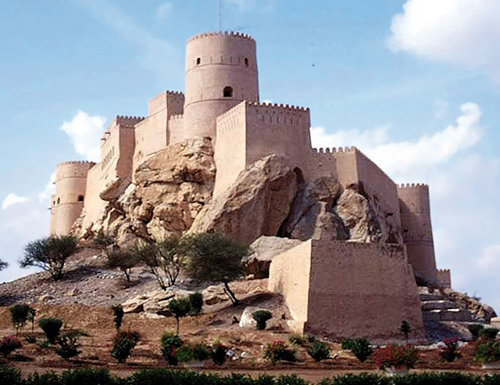 Standing proud for more than 340 years since its inception in 1670, the Jabrin Castle is one of the country’s most fascinating and awe-inspiring buildings, full of amazing details, intricate frescoes, and elaborate inscriptions that distinguish it from the Sultanate’s other castles. Built as the palace of Imam Bil Arab Bin Sultan Al Ya’rabi, and housing his final resting place, the Jabrin Castle is an authentic expression of Omani craftsmanship. From the top, the views of the Al Hajar foothills render stunning photographic opportunities for the visitor.

Make sure to check out the Jabrin Castle’s most famous rooms: The Sun & Moon Room, which was used by the Imam for discussions and consultations, and The Imam Protection Room, which the Imam’s soldiers used to hide in when he was meeting someone he did not trust. Both rooms are adorned with beautiful Islamic calligraphy and motifs. 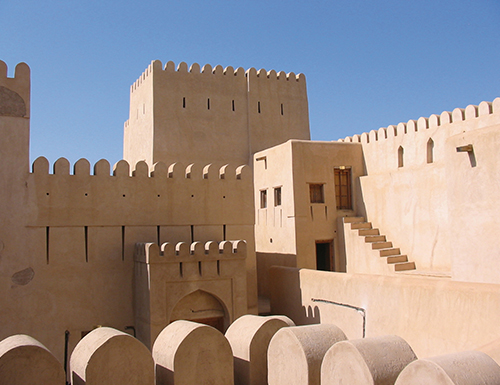 Considered to be the largest of its kind on the Arabian Peninsula, the Nizwa Fort towers above its surroundings, standing as a reminder of the important status that the city of Nizwa once held as the Islamic, political and cultural capital of Oman. Built over a span of 12 years by Imam Sultan Bin Saif Al Ya’rubi in the middle of the 17th century on top of the remains of a 9th century castle, this enormous fort features a huge central tower which has an outer diameter of 43 meters. Access to the tower is through a series of narrow corridors and dark, dingy staircases that are guarded by thick, spiked wooden doors. 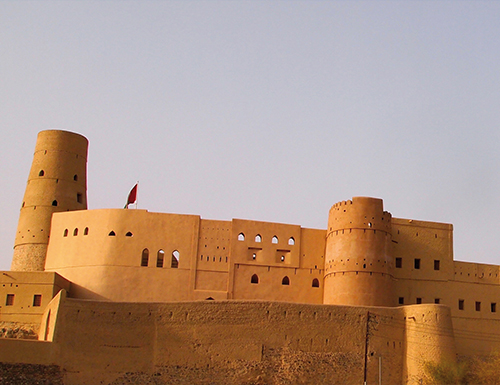 The Bahla Fort was originally constructed in the 3rd millennium BC, with a size that extends over an area of 13 kilometers. Thought to be one of the oldest forts in Oman, the Bahla Fort was acknowledged as UNESCO World Heritage Site in 1987, and opens its doors to numerous traditional souqs, ancient mosques, and pre-Islamic relics. Exploring the terraces, battlements and guardhouses confirm that the Bahla Fort was predominantly designed for defense purposes. 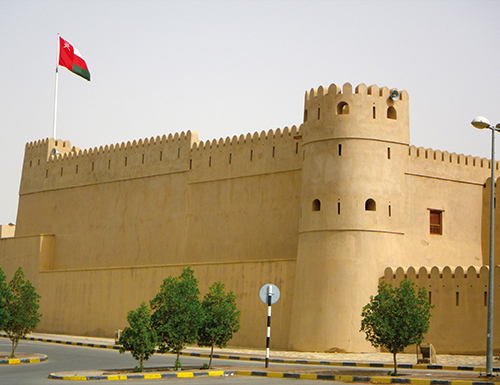 Built more than 400 years ago, the Ibri Fort stands at the site of utmost prominence in the city of Ibri, where merchants travelling between different regions of the Arabian Peninsula stopped to trade their goods. The area today has become home to the bustling Ibri Souq, which is full of traditional handicrafts and silverware. The fort contains an old mosque, characterized by its roof made of compressed gravel. 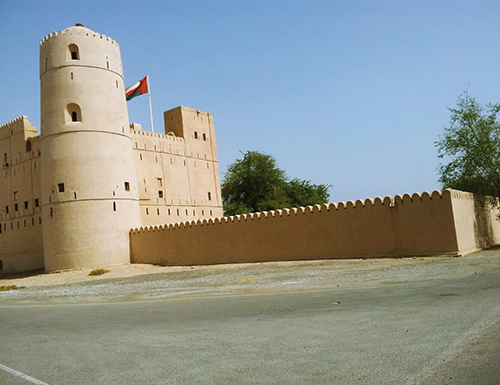 Barka is famed in Omani history for being the site of the ousting of the Persians by Ahmed Bin Said in 1747. Having been renovated in the 1980s, the fort has four towers, one of which has an unusual octagonal structure. The fort renders an excellent view of the sea and its surrounding areas. 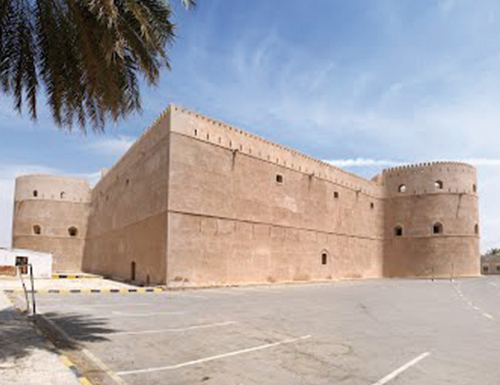 The Hazm Castle is a marvel of the architectural prowess of its builders, and is a vivid example of Islamic constructional masterpieces. Built in 1711 by Imam Sultan Bin Saif the 2nd, the Hazm Fort and Castle has an extensive network of tunnels and dungeons. The colossal wooden doors are intricately carved, and have receptacles for pouring boiling oil or date honey on intruders. Set on the banks of a wadi, this building is a great place to explore. 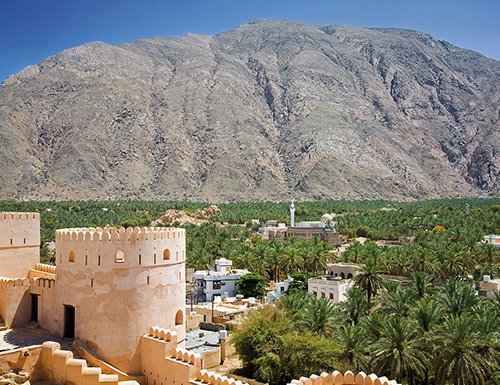 Nestled amongst the lush palm orchards of the Nakhal wilayat in the governorate of South Batinah, the Nakhal Fort is one of the most prominent of historical monuments in Oman. This immense fortification holds a commanding position in the town with stunning views of the wadi and green plantations. The most interesting aspect of the Nakhal Fort is that it seems to have been constructed with no particular architectural plan; built around an irregularly shaped rock, the rock has become a part of the building itself. 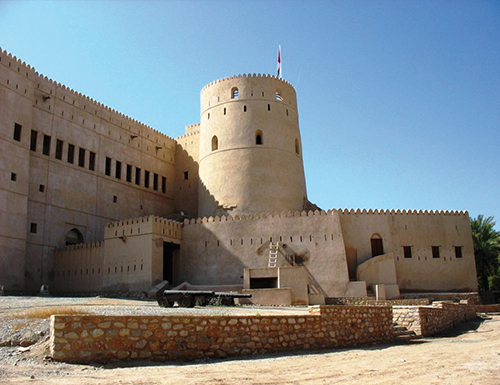 Originally built in 1250, the Rustaq Fort was refurbished to its original state in the 16th century. This fort takes many visitors by surprise due to its small entrance that opens up to colossal walls. Consisting of two floors, in addition to the ground floor, which house weapon stores, a mosque, prison, and water wells, the Rustaq Fort has four towers: The Red Tower, The Wind Tower, The Devil’s Tower, and The Modern Tower. Climbing to the highest point of the towers gives a view of the beautiful mountains in the distance. 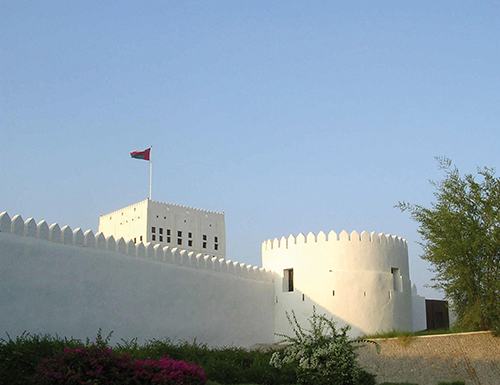 The 13th century fort of Sohar holds the fascinating Sohar Fort Museum within its walls which regales the details of the history of the city of Sohar, home to the fictional character Sinbad the Sailor, and the historical figure of Ahmed Bin Majid, a sailor who helped Vasco de Gama navigate to the Cape of Good Hope in 1498. Being an imminent historical landmark, the Sohar Fort Museum also highlights the important role played by the copper trade in this city and its relationship with the city of Canton in China.

Being the backdrop to Buraimi’s market square, stands the 450 year old Al Hila Fort, once home to the Al Nuami tribe until 1980. Imposing and large, this fort features many unique rooms and long corridors with traditional architecture and motifs, making it a great place to explore. A staircase leading to the roof gives a panoramic view of the town, the market, and the neighbouring Al Khandaq Castle. 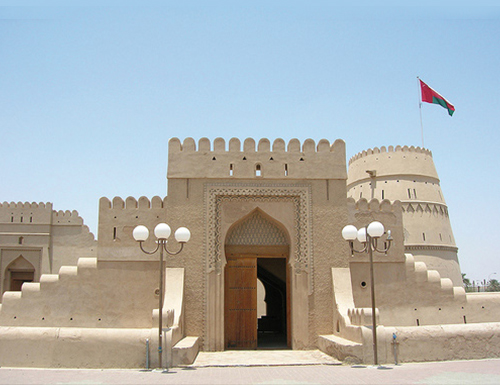 Al Khandaq Castle is considered to be one of the most important monuments in Al Buraimi. Its construction goes back to the second half of the 19th century, when it was renovated under the reign of Imam Azzan bin Qais Al Busaidi. Being a square structure with inner and outer walls, the castle is named after the presence of a large trench surrounding it on all sides. This fort is used for music and poetry evenings, as well as graduation ceremonies, and commands an excellent view of the surrounding area. It is worth mentioning that the Governorate of Al Buraimi takes Al Khandaq Castle as its emblem. 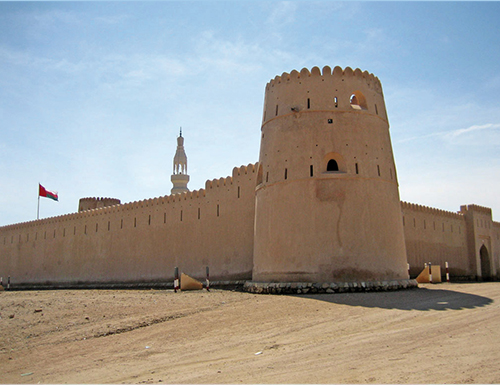 Believed to have been constructed in 1800 with an objective of warding off enemy tribes, the Bilad Sur Castle is a majestic fortress that stands proudly on the Bilad Sur Plain. The castle consists of different towers known as A’Souq, Jalan, Al Khandaq, and an extraordinarily shaped fourth one that has two stories. 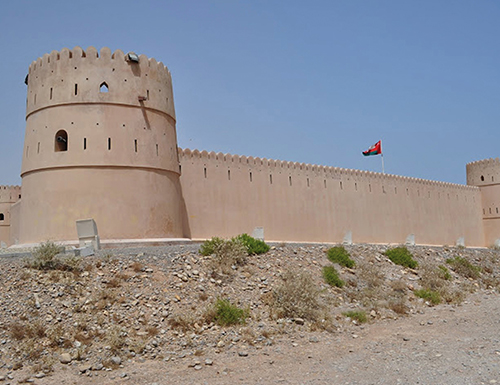 With an enviable hilltop location by the sea, the Sunaysilah Fort in centuries past was Sur’s first line of defense against sea-borne attacks. It was the most important part of the defensive system of the city that was greatly fortified to protect its illustrious overseas trade. The four corner towers are fitted with slits for cannons. Inside the courtyard is a typical example of an Omani-style rooftop crenellation. 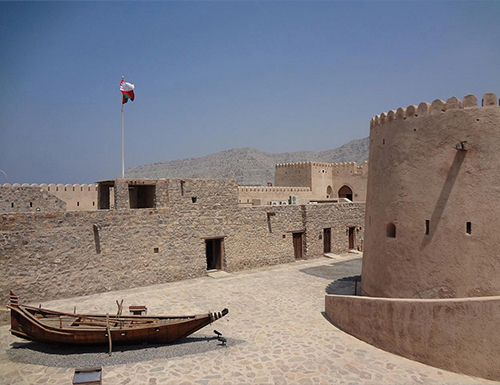 The Khasab Castle was constructed over the ruins of the Old Portuguese castle that was erected in the 17th century to keep a watchful eye on the Strait of Hormuz. The castle’s gigantic middle tower has been renovated to become a museum for displaying various handicrafts and archaeological collections of Musandam. A short walk away is the smaller Kamadra Fort which has spectacular mountain views from its battlements. 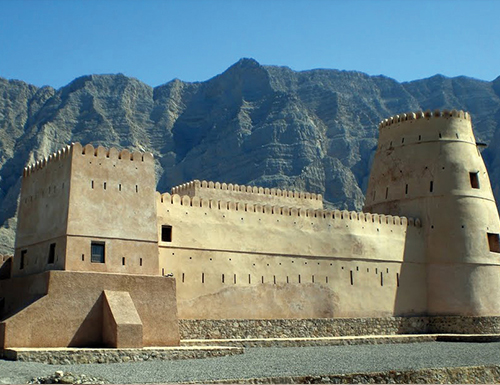 Built by Saif Bin Sultan Al Ya’rubi in the early 17th century, the Bakha Castle can be viewed from the Bakha Fort, which has an unusual pear shaped watch tower, which was believed to repel cannon fire more readily than conventional straight sided towers. Dazzling vistas of the golden mountains behind and the turquoise waters of the ocean ahead render photographic opportunities not to be missed. 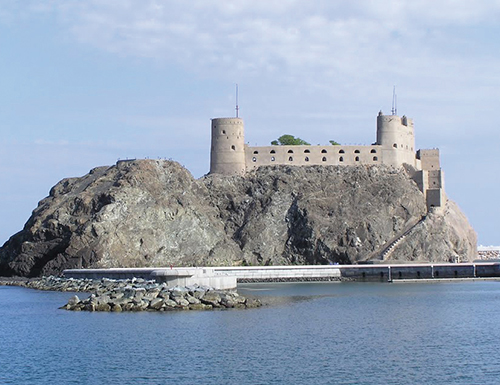 Built in the 1580s by the Portuguese, the Al Jalali Fort (also known as the A’Sharqiyah Fort) is situated in Old Muscat and overlooks the stunning Sea of Oman. The fort consists of two imposing towers connected by a wall punctuated by holes for cannons. The building is completely isolated and cannot be accessed from its rocky façade; instead there is a small bridge and stairway ending at one of the holdouts for a safe exit. Visitors can view the castle only from the outside. 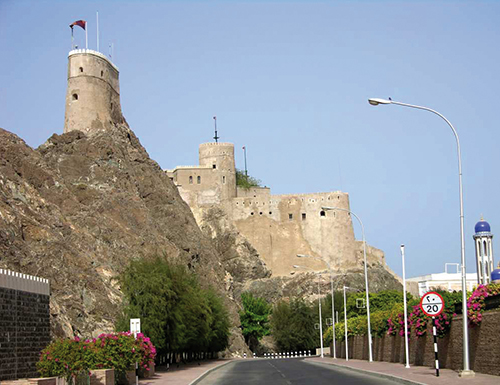 Also known as the Al Gharbiya Fort, the Al Mirani Fort is the neighbouring bastion of the Al Jalali Fort that renders a marvelous spectacle of the Omani-Portuguese architecture of the early times. Commanding a sight of high rocky hills at the end of the west wall, it can be reached by climbing a flight of stairs carved into the rock. A large dock is built at the base of the mountain, and visitors can view the castle only from the outside. 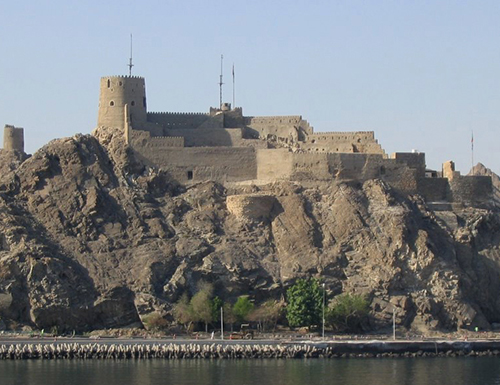 Located on top of rocky hills, the Muttrah Fort stands tall against the sea and strong winds that waft the fragrant memory of ships gone by, ships that once sailed these azure waters. Built by the Portuguese in the 1580s, this fort dominates the eastern end of the Muttrah Harbour, and consists of three circular towers: a huge one sitting on the summit and the other two are located to the west and the north.

The fort is currently undergoing renovation and is generally closed to the public; however you can scale its flank for a spectacular view of the ocean.

Do You Have Questions ?